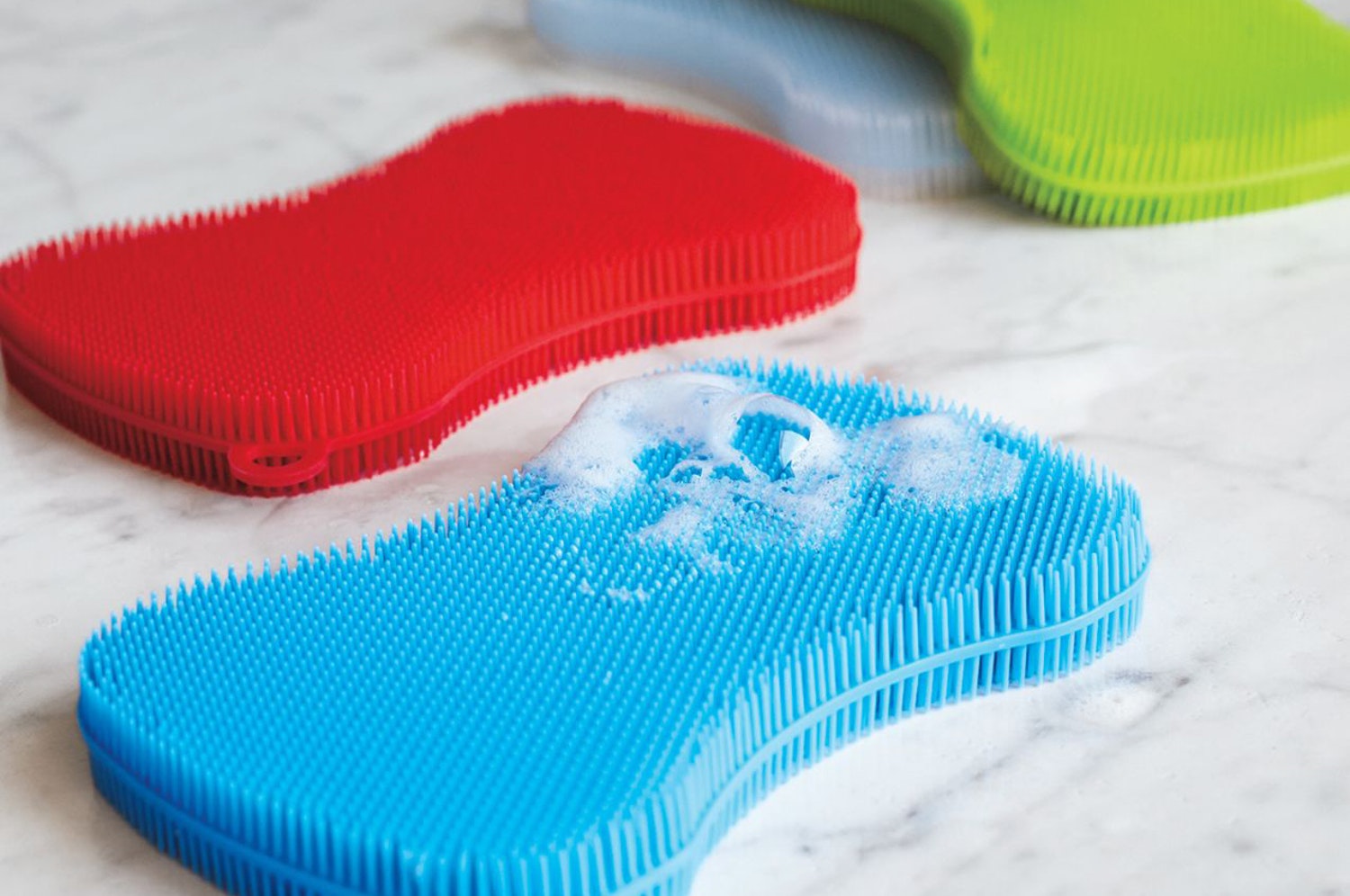 Have you ever picked up your kitchen sponge to do the dishes only to find that it smells totally musty? And not only that, but you have no more sponges left. If this has happened to you and all you could think was “there has to be a better way!” fear not, you’re not alone in this. I have had full-on existential crises over how germy and gross sponges can get, and throwing them away so often feels totally wasteful. In an effort to be a little more green—and feel a lot less grimy—I decided to try an alternative: the Kuhn Rikon silicone sponge.

Generally speaking, my sponge habits aren’t bad. I’ll keep my kitchen sponge for about a month—which is actually longer than you’re supposed to keep them (did you know you’re actually supposed to replace your kitchen sponge every week?), but I microwave them to disinfect them so they last longer. If I throw out a sponge early, it’s because it somehow got unspeakably gross or suddenly smells bad and my usual disinfecting techniques don’t work. Along with the sponge that I switch out every month or so, I use a scrub brush for anything that’s particularly stuck on my dishes and. I use my kitchen sponge mostly just to do dishes and wipe down the sink and kitchen counters. Otherwise, I’ll use rags and paper towels to clean up various messes in the kitchen and the bathroom.

Before I first got my silicone sponge, I was pretty excited. While I don’t think I’m particularly wasteful when it comes to sponges, I was looking forward to a sponge that I’d never have to throw away—it’s not porous, so it doesn’t hold bacteria the same way as a regular kitchen sponge—and could easily be disinfected (it’s suggested to put it in the dishwasher, but since I live in New York and am not lucky enough to have one, I planned to disinfect it in boiling water—and wound up having no problems with that technique).

When it arrived and I opened the package, one major thing stood out to me: This sponge is the weirdest texture, but in the best possible way. The bristles are super soft, and the sponge itself is wiggly like a sturdier-than-usual Jell-O mold. I’d be lying if I didn’t admit that I kept mindlessly playing with it at my desk all day because it felt so cool. It’s like a stress ball, but one that you’re supposed to wash your dishes with.

Here’s the part where I have to break the news that my new bristly Jell-O sponge that I was so excited about was actually a pretty big disappointment—at least, upon its initial use. I brought it home and, for once, was genuinely happy about doing the dishes because it meant I got to try out this cool new thing. But a few dishes in, I realized the silicone sponge was simply not cutting it.

For one, that soft, sturdy-but-jiggly texture was almost impossible to hold on to as soon as it was covered in soapy water—so despite the fact that the bristles are actually great for scrubbing (I’ll get to that later) it was almost impossible for me to get a good grip on it in order to actually scrub my dishes. The other problem? That same non-porous quality that means this sponge doesn’t harbor bacteria the same way also means that soap slides right off while you’re attempting to scrub, which means with continued use you’d wind up using so much more soap than usual, which feels super wasteful and is definitely not cost-effective. After washing a plate, a bowl, a pan, and a fork—just to test a little bit of everything—I gave up and went back to my boring, basic kitchen sponge (that I now appreciate even more than I used to).

Despite the not-so-successful dish adventure, I decided to put it to the test wiping down the sink and counters. Since the bristles are great for scrubbing (just not when the entire sponge is covered in water and therefore incredibly slippery) I found that it worked pretty well. I also tested it out in my bathroom sink, and it was (unsurprisingly) super effective at scrubbing off stuck-on toothpaste and the like.

Another possible use? It also seemed like it might be useful for getting a thorough clean on my makeup brushes, so I put it to the test by placing the sponge on a washcloth on the counter, dipping my brushes in water and then in soap, and then brushing them over the bristles until all the makeup seemed to come out. A quick rinse afterwards for both the brushes and the sponge, and they were all as good as new. All-in-all, I was pretty happy with the results, but I don’t feel like it was any quicker or better than cleaning them by hand.

I feel like this will ultimately be my new method of scrubbing the sinks and counters in my apartment, since paper towels are wasteful and a rag needs to be put in the laundry after cleaning—and all this sponge needs is a quick rinse (and eventually a quick wash in boiling water). So in that respect, it will still help me be a little less wasteful, and it’s definitely a convenient method to stick to. It may not fully serve its intended purpose (at least not in my experience) but for the $8 price tag, I think it’s still worth it if you can find an alternative use for it that you like.

Also, if the silicone sponge creators at Kuhn Rikon are reading this, here’s a free idea for something I would love to see: this sponge, but with a detachable scrub brush handle so you can take off the sponge part, disinfect it in the dishwasher (or in boiling water if you’re dishwasher-less like me) and pop back on the handle. It still wouldn’t replace my usual kitchen sponge, but it would be a lot cleaner—and less slippery—version of my beloved scrub brush. (Thanks in advance!)

For it’s intended purpose of doing the dishes, I want to score this a lot lower—doing the dishes was a challenge with it and I gave up after a few minutes. But because it came in handy with the counters and I was able to find a few different uses for it around my apartment that’s convenient, I’m giving it a 5.

As far as the dishes are concerned, I feel like this sponge, despite only costing $8, is even less cost-effective than just using basic kitchen sponges, because you have to use so much more soap to do the same amount of dishes, as it slides right off the sponge. I typically buy a 4-pack of sponges from Target for $4 every 3 months, which is only about $12 a year and honestly not that big of a spend for me. I also usually spend about $5 every few months on dish soap, and I can imagine with this sponge I’d easily double or triple my soap expenses. Since the way I’d use the sponge now would really only replace rags and the occasional paper towel, it’ll save me a little bit, but really, not all that much in the long run.

Using this sponge definitely wastes more soap than anything, and since I won’t be replacing my disposable kitchen sponges with it, it’s not doing much in this department either. For the counters and other uses I’ll likely be using cleaning wipes and paper towels a little less often, so it does have some positive effects there.

Have you ever used a silicone sponge?

2018-04-02
Previous Post: A Fresh Modern Twist On a Beloved Old-World Material
Next Post: Before &amp; After: A Stunning Wooden Kitchen Bar Made From Junk Sale Items