To Rebuild Syria’s Lost Monuments, These Refugees Are Learning Masonry

Syria’s civil war has displaced almost 6 million people, creating a refugee crisis of astonishing scale. The war has destroyed the country’s ancient monuments and architectural heritage, another “tragedy for all humanity” and a “war crime” in itself. A project on the fringes of Mafraq, a border town between Syria and Jordan, aims to help both. There, Syrian and Jordanian apprentices are learning conservation stonemasonry as part of a pilot project that will give them a new skill set–one that, one day, could help rebuild the hundreds of buildings and monuments destroyed in the war. 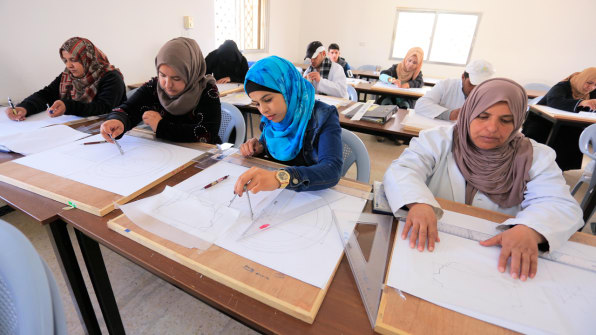 Trainees at the program in Mafraq, Jordan. [Photo: courtesy WMF]The year-long course, which kicked off in September 2017, is a partnership between the World Monuments Fund Britain and Jordan’s Petra National Trust. It’s painstaking, physically taxing work–imagine going from a desk job to shaping massive limestone blocks all day–yet the program’s initial group of 30 students has already been expanded to 45. Students arrive at the school every morning at 8 a.m. for coursework on the geometry so necessary for masons, but spend most of their time outdoors working at their “banker blocks,” or pedestals, learning the craft of shaping stone in ancient ways, from arabesques to intricate balusters.

Some participants have degrees from their old lives, but most had “never picked up a chisel” before, says World Monuments Fund Britain executive director John Darlington. He calls their progress over the last six months “astonishing,” and is already looking for ways to extend the program to other architectural conservation skills. 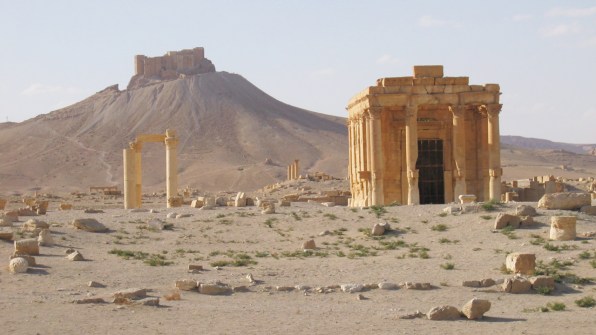 Temple of Baal Shamin Palmyra, ca. 2005. [Photo: Xvlun/Wiki Commons]For many Syrian refugees–as well as historians, archaeologists, and classicists around the world–the steady destruction of monuments has been a years-long heartbreak documented by smartphone videos and internet reports. Palmyra, the bustling city that was a lynchpin of the ancient world and a UNESCO heritage site, was destroyed in a brutal demonstration by the Islamic State in 2016–which included beheading Palmyra archaeologist Khaled al-Assad and murdering Syrians with the same explosives it used to raze Palmyra’s stone structures.

Hundreds of heritage sites across the country have been badly damaged, according to the UN, and 24 have been destroyed completely. Aleppo’s ancient city alone has seen almost 50 heritage sites damaged or destroyed. Bosra’s 2,500-year-old sites have been severely damaged. The list of destroyed sites is overwhelming, to say nothing of the looting that is stripping Syria of its cultural heritage. 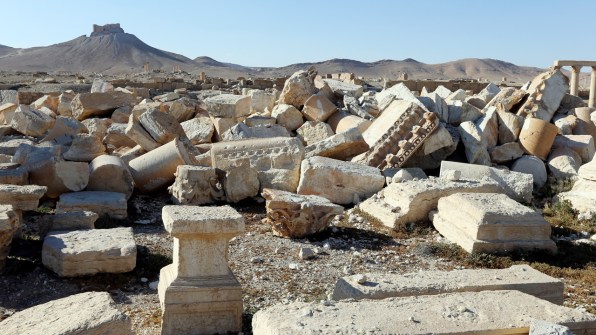 The remains of the temple following destruction by Islamic State. [Photo: Joseph Eid/AFP/Getty Images]After a war ends, it’s common for foreign governments to pledge money or expertise to restore heritage sites or cultural monuments that were destroyed. But it’s unlikely to match the scale of what’s occurred in Syria, especially since so many Syrians have fled or been killed. “So you have monuments in need, and nobody to fix them,” Darlington explains. Meanwhile, you have hundreds of thousands of displaced people, “waiting for life to continue in some kind of normal way.” The pilot program in Mafraq is designed to aid people whose lives have been destroyed by a war that’s still going on–but also build the local expertise necessary to eventually rebuild the countless structures lost in the same war. 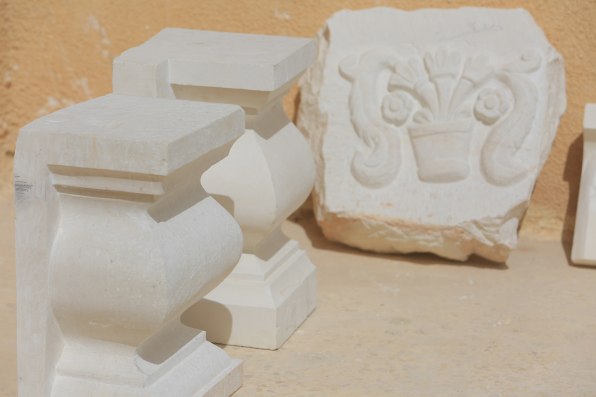 Decorative balluster work completed by students. [Photo: courtesy WMF]The World Monuments Fund was founded in New York in the mid-1960s, but the nonprofit now operates around the world, underwriting conservation projects in 90 different countries with help from corporate sponsors like Knoll, Google, and Tiffany & Co. The Syrian program has its roots in Stone Town, Zanzibar, where in 2013 the nonprofit helped conserve the city’s crumbling cathedral, and built an educational center focused on the history of the slave trade, through a training course that helped local craftspeople gain the conservation skills needed for repairing the cathedral. The WMF has taken a similar approach to partnering with local organizations to train refugees and survivors of war in conservation skills in Cambodia and Iraq, as well.

In 2016, Britain announced its first fund for international heritage work–the Cultural Protection Fund–and Darlington saw an opportunity to extend some of the knowledge gleaned from these projects to another area of the world: Syria. They partnered with Petra National Trust–a Jordanian NGO focused on preserving its eponymous heritage site, led by Princess Dana Firas–and they ran a series of educational workshops in Mafraq, which led to interviews with potential applicants for the stonemasonry program, which kicked off in the fall of 2017. 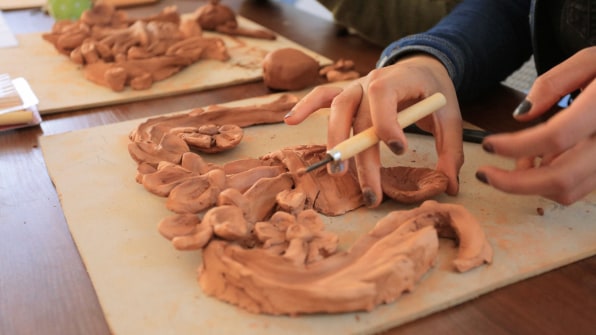 A student in the pilot program works on an ornamental piece. [Photo: courtesy WMF]Mafraq, where the school is located, sits just a few miles from the Syrian border, in northern Jordan. Once a town of about 60,000, it now hosts around more than 160,000 Syrian refugees, half of whom live in Zaatari refugee camp. It now qualifies as Jordan’s fourth largest city. The WMF program’s inclusion of Jordanian trainees speaks to the way the program seeks to address the impact of the war not just on Syrians but on all populations affected by the fighting. Participants range in terms of gender, age, and background–in a video recorded on site, we meet Mahmoud Rafeeq Al Qasem, a 40-year-old former timber trader from Homs, to Wafa Al Amat, who is from Mafraq and has a degree in IT:

The skills that students learn in Mafraq begin with the arrival of huge limestone blocks–the first task is to learn how to divide them into workable sections, Darlington explains. Then it’s on to creating a truly planar surface, then a curved one, and then on to the complex decorative elements you might find in the ancient stonework throughout the region. Conservation stonemasonry is different from typical stonemasonry, focusing on methods to preserve or recreate ancient stone buildings and other structures, but the same skills could be applied to a more conventional masonry job. The idea, Darlington says, is to give participants a skill that they can use how they want. “One of the things that we’re discussing with them, and that we’ll give them help with, is that some who clearly show talent could easily form a cooperative or atelier group and market themselves as conservation stonemasons,” he explains.

The caveat to all of their work, of course, is that the eight-year-old civil war continues indefinitely. It’s unclear when, or if, participants will ever be able to return home–so for now, their training remains several times removed from the heritage sites where some of them hope to one day work. “We’ll carry on (using the skills) when we go back to our country, to our neighborhood in Aleppo, after the war, after all this,” says Awaish Jumaa Al Jibra, a 28-year-old refugee from Aleppo, in the same WMF video. “Whatever I can do, God willing, I’ll do.” 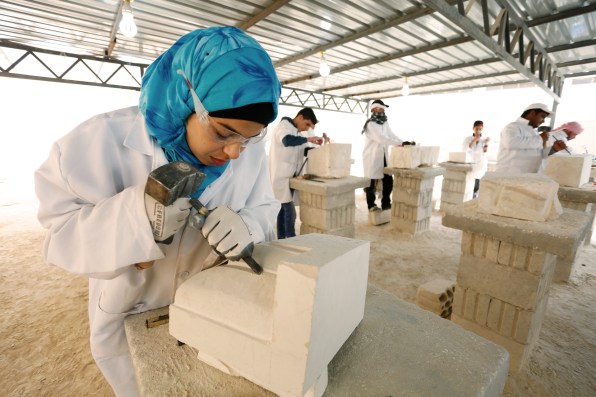 A student works at a banker’s block in Mafraq. [Photo: courtesy WMF]Some participants may go on to become conventional masons, others may decide to go into conservation–and perhaps, if they want, return to Syria when the war ends to run their own businesses as specialists. “I hope most will return to Syria when the time comes to take part in conserving their country’s magnificent cultural heritage,” writes WMF Britain program director Stephen Battle on the site’s blog. “But before then, our project provides a potential source of income, and hope for rebuilding shattered lives.”

Though the first class still has months of training to complete, Darlington is imagining the next iteration of the program–which could involve gaining access to refugee camps to broaden the pool of applicants, or bringing in student conservationists to lead a broader range of programs that deal with conserving buildings and places, from working with mortar to conservation architects. In an op-ed in the Art Newspaper, Darlington described the work as an exercise of “soft power” in the region, fostering “learning that spreads and blooms, influencing families and inspiring friends.”

For now, the program is still small. But it is its own kind of blueprint–a framework for investing foreign aid in people, rather than just places.