On the 50th anniversary of Martin Luther King Jr.’s assassination, his legacy is more important than ever. King’s impact on civil rights and the national discourse on race and civil disobedience in America was profound, but it’s easy to find evidence of his importance globally, too–just look at a map.

More than 1,000 streets around the world bear King’s name, from Kolkata, India, and Port-au-Prince, Haiti. Photographers around the world documented some of these avenues and boulevards in striking images for the April issue of National Geographic magazine, which also created an online interactive mapping the world’s MLK streets through Google Street View and the open source mapping database OpenStreetMap.

From a hedge-lined street in Roncadelle, Italy, to a residential area in the town of Huntington, U.K., to an unpaved road in Merlo, Argentina, it’s remarkable to see the diversity of cities that honored King with place names. 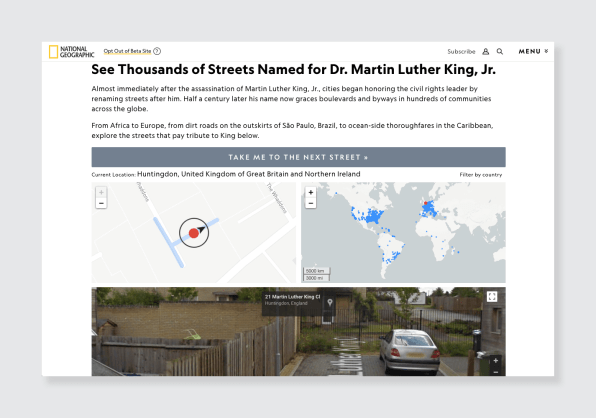 [Screenshot: National Geographic]Bonn, Germany’s Martin Luther King Strasse doesn’t just memorialize the civil rights leader for his work in the U.S., National Geographic explains. It’s also a nod to how his  nonviolent resistance, including sit-ins, encouraged West German students who were protesting during the late ’60s as well. In Haiti, Avenue MLK intersects with other streets named for revolutionary figures, like the Haitian freedom fighter Toussaint L’Ouverture. King also has a street named for him in Ermelo, South Africa, where apartheid constituted another struggle for civil rights led by Nelson Mandela.

In the U.S. alone, 955 streets are named for King. In Memphis, the city where he was killed in April 4, 1968, a street was finally named for him in 2012. “This is a city where his blood cries from the streets,” Memphis city councilman Berlin Boyd, who led the campaign to rename the street upon which King marched just before his death, tells National Geographic.

Elsewhere in cities across the country, Confederate monuments remain, a reminder of how deeply segregation and racism is embedded in the urban fabric–a legacy that remains, even when streets are renamed.