For all the flack we give Apple, when the company is at its best, its industrial design is unparalleled. Take its Magsafe technology, which instantly popped the plug out of your laptop if someone tripped over the charging cord. It’s mindless to use, clicks into the Macbook easier than a normal power cord, and has probably saved us millions in collective computer repairs. If only Apple hadn’t killed the beloved design in 2015!

However, a company called I Love Handles is now bringing Magsafe-like design to any wall socket. Called Tug and spotted by Bltd, it’s a plug for your plugs. You plug Tug into a socket, then plug anything you want into it. Whenever there’s too much force on the cord, Tug’s magnetic latch splits it into two pieces. So no one trips, and nothing gets broken. 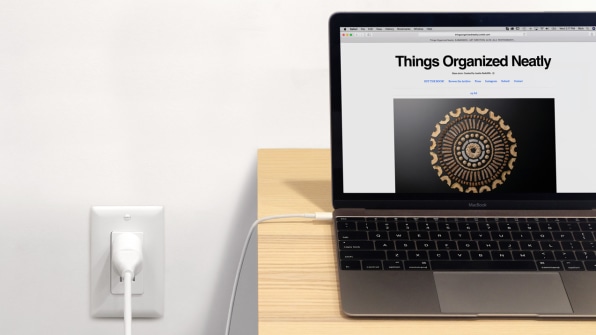 [Photo: courtesy I Love Handles]Historically, Magsafe never took off across the entire spectrum of gadgets, likely because of Apple’s own patent on the technology. But it seems I Love Handles may have circumvented such restrictions because Tug is built in a two-piece design rather than one, and it plugs into the wall rather than into the gadget itself. (Basically, it’s two steps less elegant than the ideas Apple lawyers have squashed in the past.)

Tug isn’t out yet, but it’s available for pre-order for $20, with a $10 discount if you buy three. That’s pretty pricey for a plug. Then again, it’s a lot cheaper than replacing a computer, lamp, TV, vacuum cleaner, or whatever else you might break without it.MW