A group of Swiss engineers has developed a new construction method that uses robotic arms to fabricate and assemble wooden parts into geometrically complex buildings. These buildings are so complex, they were previously impossible to build with timber. Watching the robots in motion–cutting, lifting, translating, and rotating wood across space to place them into an exact position for assembly–is mesmerizing:

The researchers from the Chair of Architecture and Digital Fabrication at ETH–a science, technology, engineering, and mathematics university in the city of Zürich, Switzerland–call their method Spatial Timber Assembly (STA). According to them, STA delivers buildings that last longer, are more solid, and can be more complex than traditional wooden constructions.  In theory, this would allow architects to use wood–an inexpensive building material–to create buildings in any shape they want. 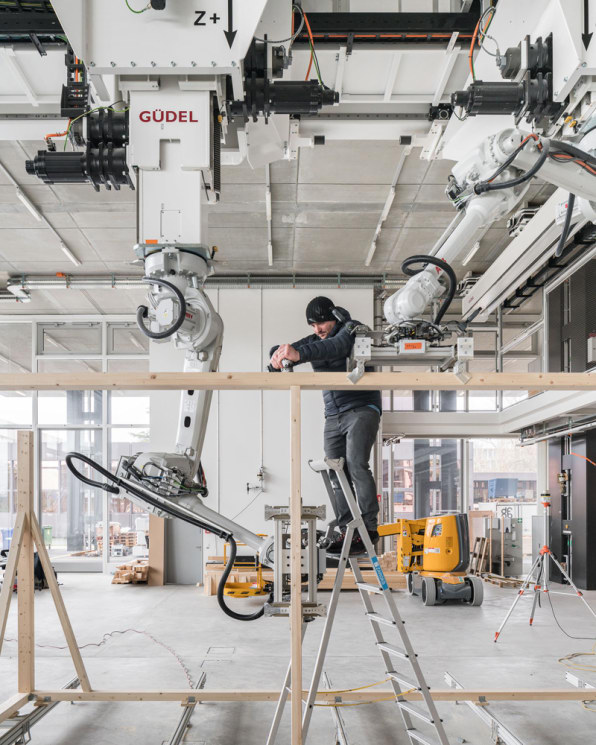 The innovation here is twofold. First, the researchers built a computer-aided design program that calculates the exact shapes, positions, and angles of the parts necessary to create a geometric structure with extraordinary rigidity and load-bearing capabilities. Using this program, a designer only has to worry about creating the shapes he wants and STA will take care of the necessary adjustments to make the structure viable.

The second key innovation is an algorithm that enables the precise positioning of the parts in 3D space using robotic arms designed and built by the university. The STA program keeps track of the exact position of the arms, the pieces they are carrying, and the pieces that have already been assembled. As the construction advances, the algorithm keeps calculating the arms’ motions in real time until each part is precisely placed in space.

Then the machines get a little help from human operators, who use screws to bolt everything together through whatever holes the machines have drilled during the manufacturing. Humans would have never been able to precisely position these wooden parts into these positions on their own without significant effort, the researchers say.

This precise machine-driven manufacturing and assembly process doesn’t need any of the metal plates and bolts that architects have to use to reinforce beams in a traditional wooden construction, saving the cost of those parts. 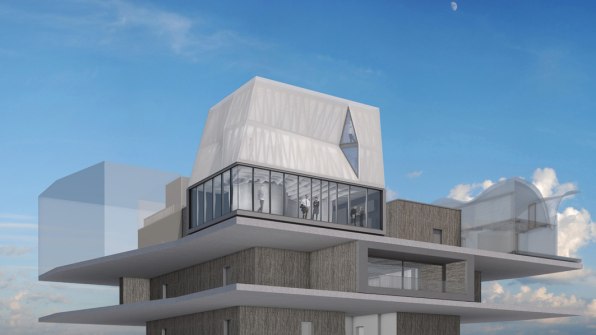 According to project lead Matthias Kohler–Professor of Architecture and Digital Fabrication at ETH Zurich–the system is also flexible. “If any change is made to the project overall,” he says “the computer model can be constantly adjusted to meet the new requirements.” According to him, STA closes the gap between design, planning, and execution.

The research team plans to test its method to create the 1,076-square-foot, two-level home that you see in the rendering above, which sits on top of a regular building. Following this, the research team is looking to work with commercial partners to turn this robotic-driven system into an industry standard.