How can a trade-fair stand be monumental? 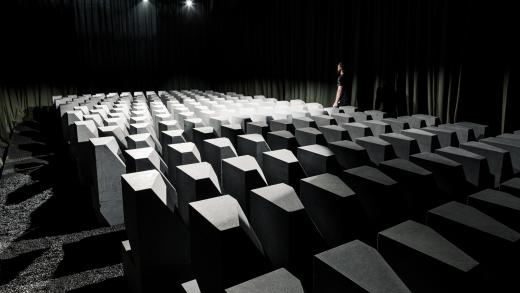 Originally on show at Expo CIHAC in Mexico City – the Latin American construction industry’s largest fair – Annual Arca saw seven prominent Mexican architects and designers unite to explore the origins of marble. At the beginning of 2017, Javier Sánchez, Mauricio Rocha, Héctor Esrawe, Javier Claverie, Rafael Rivera, Jorge Arvizu and Manuel Cervantes travelled to central Italy to visit Carrara, a city known for its white and blue-grey marble. The aim was to learn about the heritage and processes surrounding the ubiquitous material before translating that knowledge into a trade-fair stand for the group’s clients, Mármoles Arca and The Woodshop.

‘The clients gave us complete freedom in developing the stand,’ says Esrawe, director of Esrawe Studio. ‘The brief was based largely on the values of Mármoles Arca and the goal of having closer contact with architects, whom our clients wanted to approach with the right language. It wasn’t about showing a catalogue and samples, but about starting a dialogue to discuss possibilities.’

The architects reproduced a single mass of Oxford-grey granite more than 400 times. Despite the uniformity of the stones, lighting effects seemingly imbued each sculpted form with a different tone. The jury found that the result ‘created strong usage and an astonishing space’.

Another of the group’s objectives was to question the short-lifespan-to-massive-investment ratio associated with such fairs. Unlike many expo presentations, Annual Arca was given an afterlife as a public sculpture. An installation that was initially nomadic, says Esrawe, ‘eventually found a permanent home in a public park’. Jury members recognized this quality in the project, drawing attention to its ‘aura of permanence’.

Discover the most innovative and inspiring stand designs at Salone del Mobile 2018 with the Frame Awards Milan. On 18 April, awards for Best Use of Colour, Best Use of Light, Best Use of Material, and of course, Trade-Fair Stand of the Year will be presented in the historical Museo Diocesan at 18:30. Entrance is free but places are limited, so we ask that you RSVP.