Helvetica Is Now An Encryption Device

Let’s say you’re an operative with the CIA. Your agents are filing intelligence briefs to you in text documents. But how do you know that the document’s text hasn’t been tampered with somehow by someone malicious who got their hands on it?

You don’t. But researchers have figured out a way to embed encryption into typed blocks of text on paper. Their secret weapon? Helvetica and Times New Roman.

[Image: Chang Xiao]You read that right. Fonts have been transformed into encryption tools. A new paper by a group of researchers at Columbia University details a method for making tiny changes to fonts that the human eye can’t detect but that look entirely different to a computer vision algorithm. A demo of the technology, dubbed “Fontcode,” shows how they were able to embed the secret message “Hello World!” into a paragraph taken from The Lord of the Rings.

How does it work? The researchers use an algorithm from previous research that can slowly shift letterforms from one typeface to another to make tiny changes in the shape of every letter that the human eye can’t detect. That could make an “h” slightly thicker in the stem,” or the curve of a “j” slightly sharper.

To make the system work, the researchers used a deep learning neural network to train a computer vision algorithm to identify the slight variations in each letter correctly. 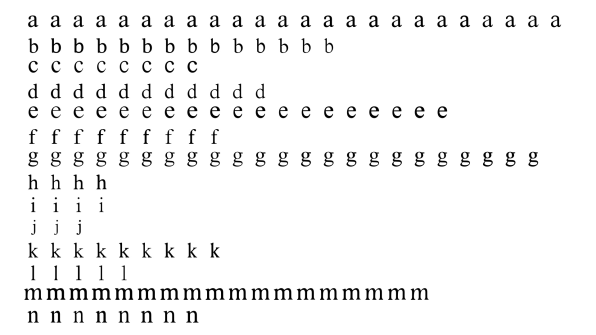 [Image: Chang Xiao]It’s a clever use of machine learning, one that has immediate applications in security. The researchers’ code book and machine learning algorithm could be used to ensure that documents haven’t been tampered with by embedding an authentication code–or some kind of secret message–into the font itself. Then, when someone receives the document, they can use the decoding algorithm to ensure the message is still there. If it’s not, then someone has somehow altered the document.

Changxi Zheng, an associate professor in computer science at Columbia who directs the university’s Computer Graphics Group and led the research, says that companies in the legal space and intelligence agencies have already reached out with interest. He is hopeful that someone will turn the research, which will be presented later this year at the graphics conference SIGGRAPH, into a product. Zheng’s next line of research is designing 3D, physical objects that would also be able to encode digital information.

[Image: Chang Xiao]Zheng sees other potential applications for the Fontcode technology as well. For one, the research could embed metadata into documents without altering how the document looks, similar to how metadata is already embedded in photos. And second, it could act as a virtually invisible version of a QR code or barcode. Instead of scanning a QR code to access more information about a product, event, or company, you could just take a picture of a poster’s text, which could have a link embedded within it.

“When you think about a poster or any surface of an object, you should think of it as real estate,” Zheng says. “Now we start to put visual content on the surface. And then you have to make a choice: either put visual content that’s supposed to be perceived by human eyes, or you put content, like a QR or barcode, which is meaningless to our eyes but are useful for a computer system. It’s a fundamental competition.”

But the project enables the content on a surface to be entirely for human eyes, without sacrificing the connection to digital systems. In that sense, the research could be a boon for graphic designers.

“If you think about a beautiful poster, the entire poster is to please the human eyes,” Zheng says. “And we don’t need to put the QR code patterns. That’s a distraction.”