The Future Of Food In The Age Of Instagram And Netflix

Before any of us had ever heard the phrase “farm to table,” an understated garden restaurant off of New York City’s Washington Square Park called Blue Hill was serving a radical menu of local, seasonal dishes. A few years later, they’d add Blue Hill Stone Barns to the mix, a restaurant and educational center in upstate New York that brought hungry guests right into the thick of raising animals and growing produce, and spearheaded the rustic chic trend that’s since taken over Pinterest and every social event you know. 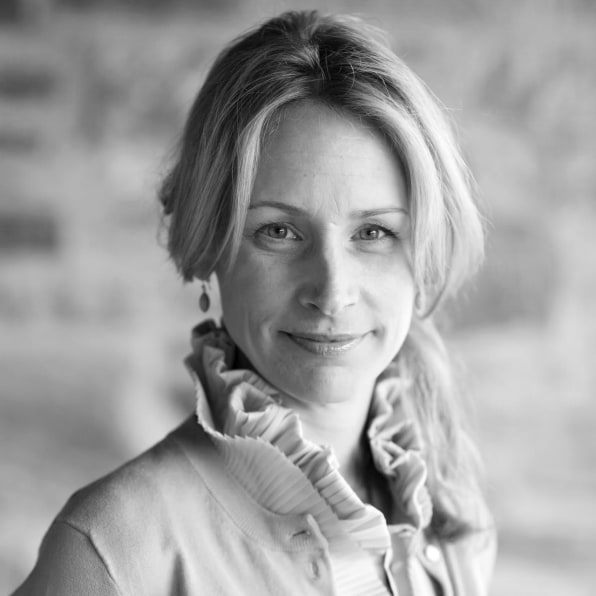 [Photo: courtesy Blue Hill Farm]Laureen Barber is the co-owner and design director of Blue Hill, and sister-in-law of head chef Dan Barber. She’s also a judge in our upcoming Innovation by Design Awards, and I recently had the chance to chat with her about the present and future of the restaurant industry–from the rise of a new era of hospitality driven by fast casual, to working in the age of the hungry Instagrammer.

Fast Company: I sat in on a dinner with about 20 restaurateurs a few years back. And what they said was that the era of the mega chef who dictated a prix fixe meal to you was over. Now, they said, we were going to see a return to hospitality and the “customer is always right” mantra. But I haven’t seen it. Have you?

Laureen Barber: I guess my experience in New York, and dining at some of the top restaurants around the world, is that I’m still seeing the “sit down and really surrender yourself to the chef’s vision” approach. But you’re there because you want to experience the place, the environment, and the chef’s vision. And it only seems to be happening more.

I think the Netflix shows have helped fuel that really specific type of culinary experience because the personalities [of the chefs] are really highlighted. People feel like they know them and want to be a part of the kitchen. And it’s like any type of celebrity where you feel like you know them, even though you’ve seen them from afar.

FC: So is old school hospitality dead, then?

LB: Definitely in fast casual, I hear lots of conversations about technology being the driver in giving customers what they want. Like Clover in Boston–they’re an interesting company, the way they combine metrics and fast casual.

FC: They try to record preferences and then rework the menu around what people actually want. In their case, it’s technology gearing hospitality toward the customer. They measure how quickly they get the food from the order to you, and then they try to beat their time–they even have a clock ticking, and it’s on a giant monitor. So that’s a great intersection of technology and customer service, I think, in an organic, local, fast casual setting. 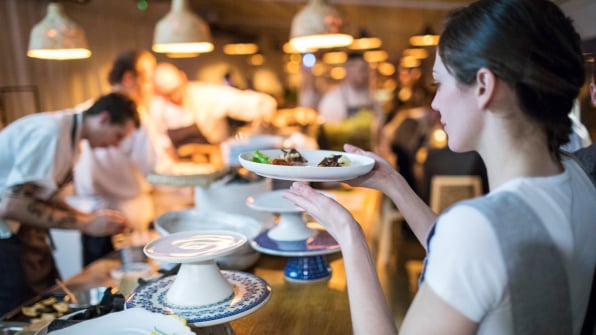 wasteED London service. [Photo: Richard Boll/courtesy Blue Hill Farm]FC: Last year, you threw a pop-up restaurant called Wasted. You literally served the food most kitchens dispose of as scraps. It was a huge sensation that sold out. Why did it resonate?

LB: I think we were doing it at the right time and the right place. I think that there’s a young audience that wants to engage with the story around wasted food, and the meal was affordable to them. It really spoke to their interest, and doing something thoughtful around food.

FC: You were serving garbage though! 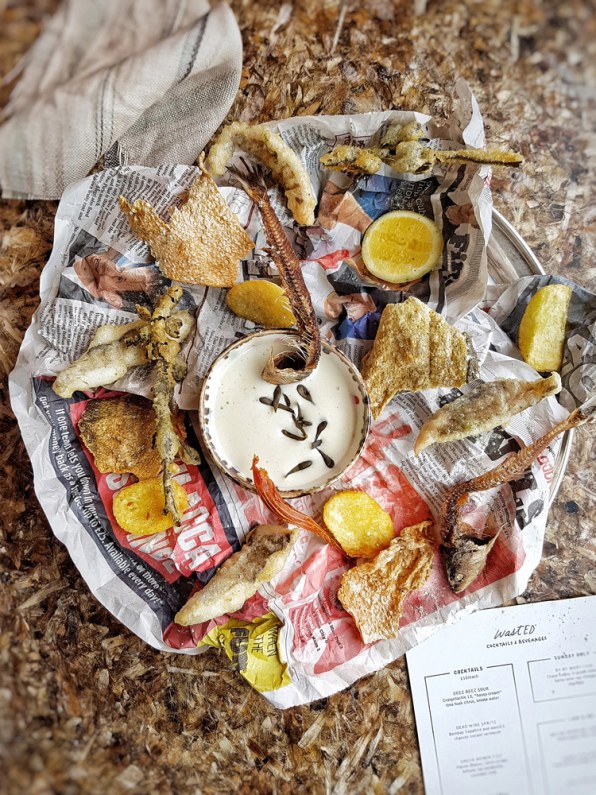 [Photo: courtesy Blue Hill Farm]LB: They’re things we’d positioned as forgotten, unused, wasted. The juice pulp is such an easy example. It’s full of nutrients and delicious. Why do we waste it? People could understand it pretty easily. So I think it resonated with people, young people especially. Young people are adventurous.

FC: Why haven’t you brought back Wasted again this year?

LB: It’s like opening a restaurant! It’s an endeavor you can’t do every year–at least, at the size of a company we are. You design a restaurant, then you close it in a month? It’s a lot of effort for a limited amount of time.

We’ve been recreating it on a smaller scale with different events. We recreate it when someone has an event at Stone Barns, or we’ve gone into companies and produced a meal for them as Wasted. We’re sort of taking it on the road, and we’re trying to integrate it into the regular menu.

FC: It feels like restaurants used to be made around the vision of a chef. But now, frankly, I see more menu items, and even places, designed around Instagram. Charcoal ice cream. Unicorn Frappuccinos. Rainbow bagels. Neon signs.

LB: I agree with you 100%. It’s happening, and it doesn’t seem to be slowing down. Overall, I think it’s fun. But I don’t know. I guess I’m a little traditional when it comes to this. There’s part of me as a restauranteur that wishes people would just enjoy the meal and not take pictures of everything, but I’m all about the way things look and aesthetics, so I understand the urge to photograph and share a meal. Especially if it’s a one-time experience.

We have not had any strategy behind Instagram at all, except with Wasted. We made these little photo booths. And we put up little signs that said “Wasted” on the bathroom mirrors, completely with the purpose of people doing selfies in the mirror with the word “wasted.” We did incorporate social media because it felt like an event, and a celebration, and it would heighten the fun quality of Wasted. 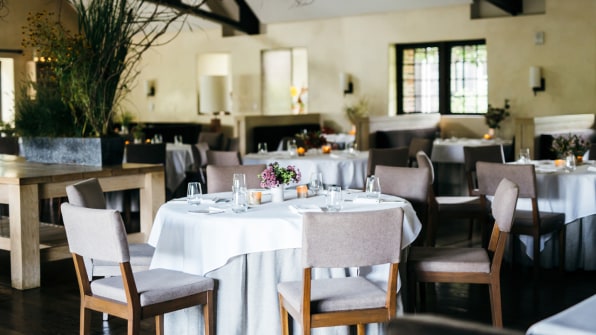 [Photo: Ingrid Hofstra/courtesy Blue Hill Farm]FC: Have you seen any restaurants designed to create an incredible dining experience, but also design for those Instagram set photo ops–without ruining the experience?

LB: The Butcher’s Daughter. They have a place in the Lower East Side, and now in L.A., and it’s really popular with a younger set. I think it’s geared toward food trends. Lots of vegan dishes. Lots of gluten-free options. Just in terms of dietary preferences, I think they’re really good at responding to that type of thing, and they created a very unique environment that speaks to that. There are lots of plants all around, it looks really natural, but it’s got a hip vibe. They play cool music. The whole package is [cool], from the uniform, to the environment, to the menu–down to the copper cup that you drink out of with a cool straw. It’s all really current and responding to design trends as well as food trends in a really immediate way.

I don’t know how explicit they were when designing the place for Instagram, but it’s a really great place to take pictures. Maybe at this point, Instagram is just such part of our culture we design with it in mind without thinking of it. I bet for people doing new design, they really consider it without making it an explicit design strategy for sure. 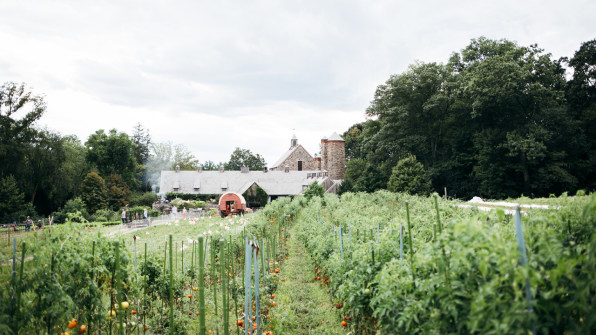 LB: We’re on a farm. It is interesting is to see what people Instagram, and that can inform what you do from a design standpoint. Mostly people want to take pictures of the outside, because of the location and beauty of the building. So I think of social media existing more like, outside the restaurant, rather than inside the restaurant. I want to make sure that outside, everything looks beautiful.

FC: Will there be more pushback to the whole Instagram restaurant phenomenon?

LB: I think we’ll probably see more pushback. From personal experience, if you look around a restaurant and everyone is on their phone, it’s depressing.

FC: There’s actually research that says we’re measurably less happy when we eat a meal while on our phones.

LB: The table is, in my mind, for talking. You don’t see people on their devices in fine dining restaurants. You do see Instagramming, definitely. People love to photograph their food. It is part of the conversation we do have internally a lot, though. Because we want the experience to be so rich and fulfilling, and those types of interruptions don’t lend themselves to a flow in terms of your experience. And a lot has to do with the proper flow.