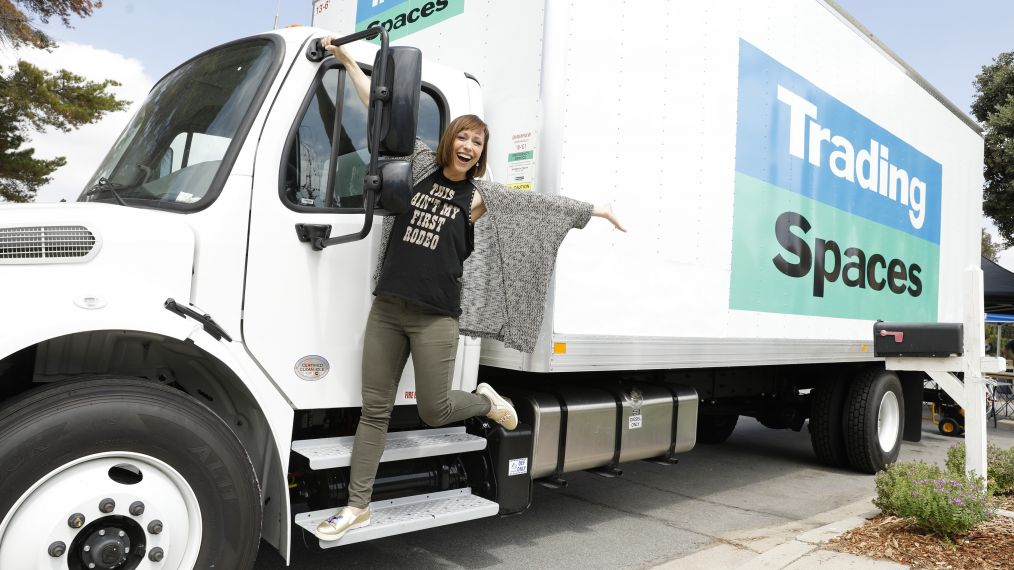 It’s finally happened: the “mother of design shows” has returned after a ten year hiatus, and everyone is reliving those early aughts vibes. Here’s how the first episode of the Trading Spaces reboot went down, and what Twitter thought of it. [Spoilers ahead.]

So much of the OG cast is back, including everyone’s favorite host, Paige Davis, sporting a “this ain’t my first rodeo” tee. And it’s no one’s first rodeo, really; there are so many familiar moments in the first episode. To kick it off, we get a classic key swap moment, despite that these two neighbors are sisters and their respective husbands.

There’s no easing back into it, either: the first two designers are Hildi and Doug, and is anyone really ready to let them loose in their homes? They have double the budget ($2,000) and double the carpenters (Hildi has Ty and Doug has Carter) than the original series, and well, they still push both to the limits.

Despite telling the homeowners they have a say (lol), the only real moment of choice comes when they get to pick something their designer has to use in the room from the new Wayfair tent. Wayfair also has a section on their site where you can shop items featured on the show, like bird figurines and an arc lamp.

Check out how Twitter reacted to the return of the pioneering series.

Some questioned whether this is a good idea.

Okay…why are they bringing Trading Spaces back?! I’m sitting here watching an old episode where the designer decided to staple 6,000 fake flowers to cover someone’s bathroom walls, painted the white trim metallic, and painted the ceiling purple…Chip and Joanna would be ILL

We’re all older now, that’s for sure.

Year 2000: watching #TradingSpaces while getting ready for a fun night out with friends.

Year 2018: wondering if I will be able to stay awake long enough to watch Trading Spaces.

also me, 5 minutes into episode 1: “OMG NO IT’S HILDI AND DOUG ABORT ABORT”

Technically, she didn’t glue anything, so… progress?

All I really need to know about this #tradingspaces reboot is if Hildi has actually learned how to be a designer or if she’s still ruining lives by gluing random shit on people’s walls.

Someone whip up a bracket and order some wings.

I’m yelling at tv during #TradingSpaces like my husband yells at the tv during any sporting events.

Reactions to Hildi’s room were cold.

Yes. Every time i visit my penguin friend in his igloo, i comment on how unique his bike tire art is. #TradingSpaces

How I’m feeling about Hildi and that room right now. #TradingSpaces pic.twitter.com/2C8HWCFsd4

Doug didn’t have it in the bag, though.

The best thing about the burlap on the walls is that it’s easier to take down than glued on hay. #TradingSpaces

(You can check out the full 360 of both rooms if you need a refresher.)

Paige Davis gives a 360 tour of Doug and Hildi’s final room transformations on the premiere episode of #TradingSpaces. Check it out at //t.co/SizZdZC89r. pic.twitter.com/wvs02vzcZh

But in the end, we still feel this way.

My daughter just said…”can we watch this everyday?” Year made. @TLC #Tradingspaces

Next week, there’s already a twist: Ty and Carter will be the designers! How do you think they’ll do?

Did you hear the news? @typennington and @carterooster will be the DESIGNERS on the next episode of #TradingSpaces! See if they nail 🔨 the new role Saturday at 8/7c! pic.twitter.com/Q2r104z85U

2018-04-09
Previous Post: A Laundry Room Goes From So Much Brown to Wow — Before & After
Next Post: I Asked People What They Regret Not Doing More, and This Is What They Said