Facebook CEO Mark Zuckerberg is back on Capital Hill today, testifying before Congress and trying to keep a straight face as our elected representatives expose their limited knowledge of that modern wonder we call “the internet.” Yesterday, for example, Senators on the Judiciary and Commerce committees  helped the public learn that Facebook is free for users because it runs ads (who knew!) and that Twitter and Facebook are not, in fact, the same.

It quickly got worse: “Mr. Zuckerberg, a magazine I recently opened came with a floppy disk offering me 30 free hours of something called America On-Line. Is that the same as Facebook?” Sen. Chuck Grassley, R-IA, asked the billionaire.

The hearings have been painful to watch. And it’s not just the bumbling Congress members and Zuckerberg’s endless deflections. It’s the format itself. Per tradition, Congressional hearings involve several dozen Senators or Representatives crowded into a room, with each one conferred equivalent time for questioning. For Zuckerberg’s hearings, each member has been allocated four minutes.

Some members use their assigned minutes for scoring political points; witness Sen. Ted Cruz’s (R-TX) grandstanding on Facebook and “political speech,” a gift to Fox News. Some inadvertently use the time to showcase their ignorance. And a few, well-briefed by their aides, manage to glean new information and push the conversation forward, as Sen. Dick Durbin (D-IL) managed to do on data privacy. As a viewer, and a citizen, I would surely like to see more of the latter. 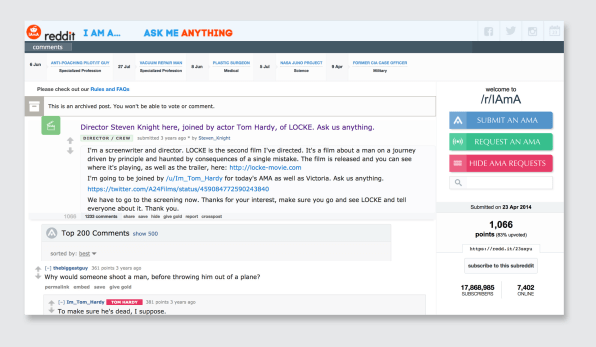 Your Vote Should Matter

What if, instead, hearings operated more like Reddit AMAs? The format is probably a familiar one: Celebrities and people with interesting lives submit to “ask me anything” questioning from the Reddit community. Recent AMA OPs (original posters) include actor Tom Hardy, an American woman who lived in Saudi Arabia for a year, and someone attacked by a grizzly bear.

What makes AMAs effective is the democratic principles by which they operate. Anyone on Reddit can submit a question, but the questions most like to get answered (and read) are the ones with the most votes.

Congressional hearings should follow a similar logic. Instead of simply watching a C-SPAN livestream of questions and testimony, the public should be able to weigh in on the questions that members prioritize, in real-time. Senators or Representatives whose questions receive the most votes would be given the most time. And in theory, questions that waste everyone’s time would fall to the bottom of the list.

A system such as this would never work perfectly. Like democracy itself, crowdsourcing is messy. But an AMA-based model would certainly be an improvement over the current hearing format, with its artificial time blocks and #facepalm moments.

Oh, and while Congress is at it—let’s make the State of the Union a product demo, not a policy speech.