The average age of a building being demolished in the 1950s was 111 years, according to urban economist Richard Barras’s book, Building Cycles. By the early 2000s, the age was down to 60 years. That number seems to still be dropping: another study pegged the age of some demolished buildings at less than 50 years. Today, we treat buildings a lot like the way we treats smartphones or clothing: as products that need to be replaced regularly, whether because they’re unfashionable or unsuitable. Demolition is now a genre of satisfying aesthetic content unto itself, like ASMR or slime videos. “The Top 10 Demolitions Gone Wrong” has 25 million views on YouTube.

That’s the backdrop to Brutal Destruction, a new exhibition at Boston’s Pinkcomma opening tomorrow. Curated by the architect Chris Grimley, the show features mid-20th century architecture as it’s being demolished–grisly yet beautiful portraits of buildings with one foot in the metaphorical grave. “You often hear of the buildings going away,” says Grimley. “You don’t often encounter their erasure.”

Grimley is one third of the the interdisciplinary design studio Over,Under, alongside Michael Kubo and Mark Pasnik. The trio are advocates for Boston’s mid-20th century architecture, much of which has been threatened by demolition for years; they’ve produced a book (Heroic: Concrete Architecture and the New Boston), other exhibitions, and a map of Brutalist Boston in partnership with the popular Brutalist map series from Blue Crown Media. 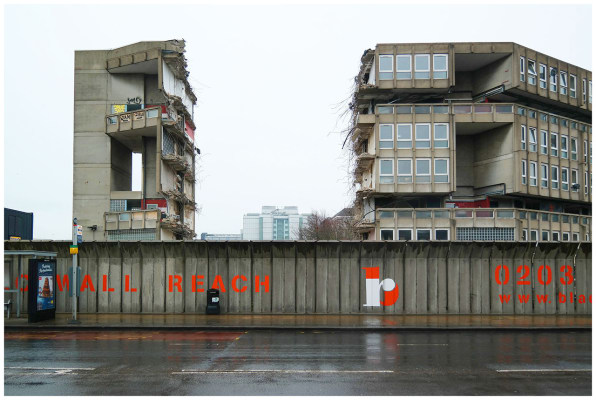 [Photo: Oliver Wainwright/courtesy Pinkcomma]Brutal Destruction is the result of a trend across much of North America and the U.K., where the demolition of unpopular midcentury architecture seems to be reaching a crescendo. There are images of Robin Hood Gardens, the 1960s public housing tract designed by Alison and Peter Smithson and demolished last year. In photos by The Guardian architecture critic Oliver Wainwright, the half-razed building looks like it’s had a tooth knocked out–one section of facade has simply been sloughed off, rebar fraying at each end. A series by architectural photographer Matthew Carbone shows the destruction of John Johansen’s 1967 Mechanic Theater. In Carbone’s photos, the building’s exposed floor plates and drooping roof are crowned with a halo of light, reflected off of nearby glass. The images are almost overwhelmingly colorful and luminous.

“We get caught up in notions of what is considered beautiful,” Grimley says. “By the time things are allowed to be considered beautiful again, it’s often too late.” The curator points out that preservation itself is a relatively new phenomenon, and that every era has attempted to erase the “monstrous” architecture of the generation that came before it–take Haussmann’s demolition of Paris, for instance. Yet that cycle has steadily accelerated, and today, Postmodern buildings that are as young as 30 but considered unfashionable are under threat.

“Regardless of their stature, there’s a lot of embedded energy in [these buildings’] production,” Grimley adds. “And to take them down, without thinking of their potential for reinvention or renewal, is  a nearsighted act.” Buildings account for almost 40% of CO2  in the United States. Globally, the building and construction industry produces a third of all emissions, from making concrete to shipping steel around the world. “[T]he current wave of destruction says more about our own pessimism, the weakness of our potential building legacy, and our lack of patience in finding ways to supersede the cycle of ugliness and make these monstrosities our own,” he concludes in an exhibition statement.

The most damning thing about our disgust at architecture’s recent past may have nothing to do with heritage, fashion, or history. It has to do with waste.