Scientists at the Nanyang Technological University in Singapore have finally solved one of the toughest problems in the history of humanity. A problem that has plagued hundreds of millions of buyers on a budget since 1943–the year they started following Ikea instructions. Now, finally, robots are sophisticated enough to assemble our furniture for us . . . or at least one chair, for starters.

In a research paper titled “Can robots assemble an IKEA chair?” and published in the April issue of the journal Science Robotics, the NTU scientists describe a method that allows two robots to assemble a $25 Ikea Stefan chair just like a human being, but without the frustration.

Their invention has two parts. First, the hardware–two robotic arms equipped with 3D cameras that identify all of the necessary pieces and orient the robot itself in space. The hands at the end of these arms have fingers that grasp and move the pieces, plus sensors on their wrists to measure the appropriate pressure (who among us hasn’t hex-wrenched a bit too hard?). 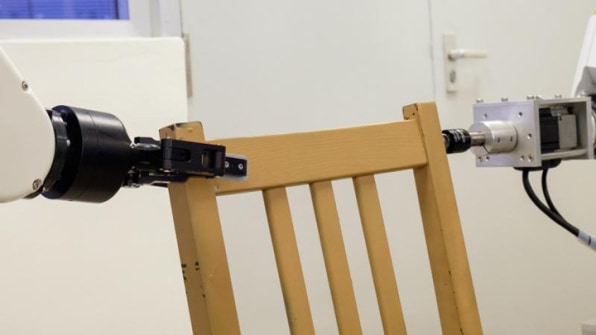 The second part is the software. The researchers created an algorithm that plans a fast, collision-free motion path for the two robotic arms and their hands to follow. This calculated path takes into account the size of the pieces, how the hands should grab the parts, and exactly what movements the arms will need to make to assemble them. Meanwhile, the algorithm uses the gripping sensors to regulate the force that the hands need to exert on each piece, depending on the material–a wooden peg will need a different kind of force than a metal one, for example.

Their research, the team says, won’t end with the completed chair. They want to expand their use of artificial intelligence so the optical sensors can actually read the Ikea manual, which will make these two bots capable of assembling any piece of Ikea furniture–or anything that needs assembly, actually. Ikea makes a great testing ground, but the scientists’ end game is to create more versatile robots that can assemble any object without specific programmed directions. In theory, one day you could put one of these metallic arms in a room scattered with parts, pass it the instructions, and let it figure the rest out.

For now, though, the chair experiment was a success. The robots were able to assemble the Stefan without any incidents in just eight minutes and 55 seconds. That’s at least two hours faster and two alcoholic drinks less than me.