Ray Komai (1918 – 2010 ) was a Japanese American; he was a graphic, industrial and interior designer. He studied in Los Angeles at the Art Center College. He was known for his iconic plywood chair, tables upholstered seating and textile and wallpaper designs. He was born in Los Angeles.

He studied interior, industrial, and commercial art at the Art Centre School, which was formed in 1931, from 1936 to 1941. Richard Neutra, Frank Lloyd Wright, Kim Weber, R.M. Schindler, and former student Alvin Lustig offered master classes as part of the faculty. He was incarcerated at the Manzanar War Relocation Centre in California for eight months in 1942, one of eleven internment camps in the United States during WWII.

He settled in New York in 1944, where he worked in advertising and set up a graphic design and advertising office (with Carter Winter). J.G. Furniture created Komai’s 1949 moulded plywood chair with a split seat and bent metal legs. They produced his other designs of chairs, tables and upholstered seating as well.

From 1945, for Laverne International New York, he designed wallpaper and textiles in figurative and abstract motifs (inspired by paintings by Pablo Picasso, Paul Klee, and Cubist painters).

He was associate art director for the Advertising Forum from 1952 to 1960.

He was a designer at the U.S. Information Agency from 1963 to 1976 and created cultural exhibits in Germany, Austria, India and Japan.

A selection of his work 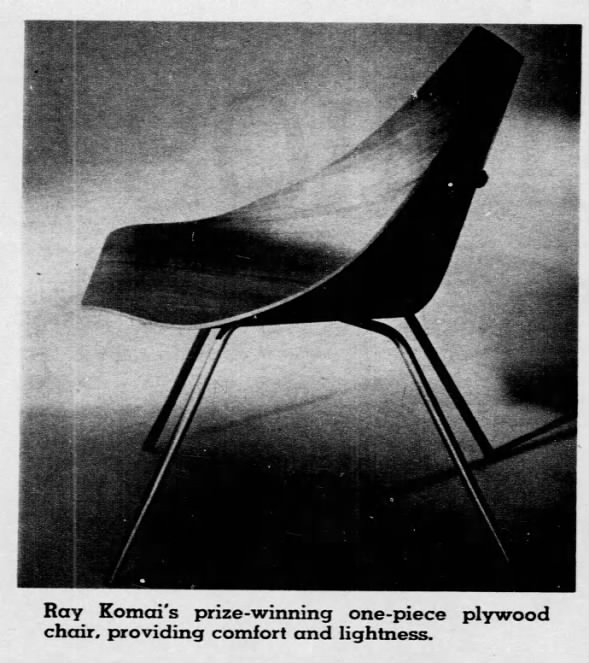 Ray Eames (b. Bernice Alexandra Kaiser 1912-88) was an American designer. She was born in Sacramento, California. She was the wife of Charles Eames. In creative partnership with her spouse Charles Eames and the Eames Office, she was responsible for groundbreaking contributions in the field of architecture, furniture design, industrial design, manufacturing and the photographic arts.

Isamu Noguchi (1904-1988), was an American sculptor and designer. He was born in Los Angeles and professionally active in New York. He was influential and well-received in the twentieth century. He produced sculptures, gardens, furniture and lighting designs, ceramics, architecture, and set designs throughout his lifetime of creative experimentation.