Verner Panton (1926 – 1998) was a Danish architect and designer. He was born on the Danish island of Funen. He worked professionally in Binniningen, Switzerland, and the United States.

Until 1951, he studied architecture at the Odense Tekniske Skole and Det Kongelige Danske Kunststakademi in Copenhagen. 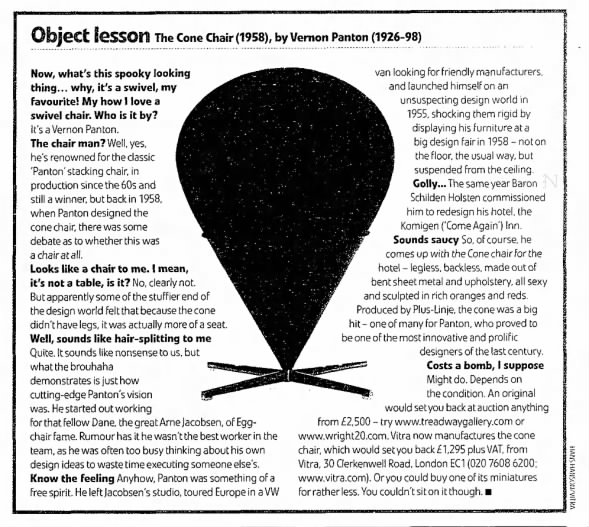 Verner Panton travelled widely over Europe in his Volkswagen Transporter after working as an assistant to Arne Jacobsen. His peculiarity earned him the title of “Denmark’s Most Controversial Designer” for the rest of his life.

His K1 Cone Chair was shown upside down on the ceiling at a furniture fair in the late 1950s. Inflatable furniture, a transportable, low-cost plastic house, and a spherical house – a glass sphere reminiscent of R. Buckminster Fuller’s geodesic dome – were also built by Panton. Poul Henningsen, a lighting designer, praised his colleague’s “instinct for lighting” and “sense for darkness.” Above all, Henningsen regarded Panton as a gifted atmosphere creator.

Panton emigrated to Paris and Cannes in the early 1960s, escaping the constraints of Denmark. He subsequently resided in the Swiss city of Basel. His exuberant use of colour and bold, experimental designs, which had previously been dismissed as absurd, established a new trend.

Work with Plastic and Synthetics

Panton’s stage was the Cologne International Furniture Fair. Bayer, the German chemicals behemoth, soon hired him to demonstrate its cutting-edge technologies. The company sought to show how plastic, polyurethane foam, and novel synthetic fibres may be used in various ways. Panton responded by creating Visiona 2, a wondrous fantasy world for the 1970 Cologne show. The Panton Chair, a cantilever chair made from a single piece of plastic, was the genuine show-stopper. Panton was the first to execute a similar technically and artistically advanced concept, which several other designers had explored. He had designed the 5 Chair for Thonet the previous year, a plywood design that anticipated the Panton Chair’s fundamental form. It was later refined for his Art Chair series.

Like Eero Aarnio of Finland, Panton was a master at transforming flowing forms into gorgeous plastic masterpieces, but he went far further. The Visiona 2 project was the first complete synthetic landscape, a future world that clearly demonstrated the space-age effect one year after the Apollo moon landing. Panton set intended to stimulate all of the senses, re-creating a spectrum of diverse experiences, “from claustrophobia to carnal yearning,” according to the Danish culture journal Mobilia. 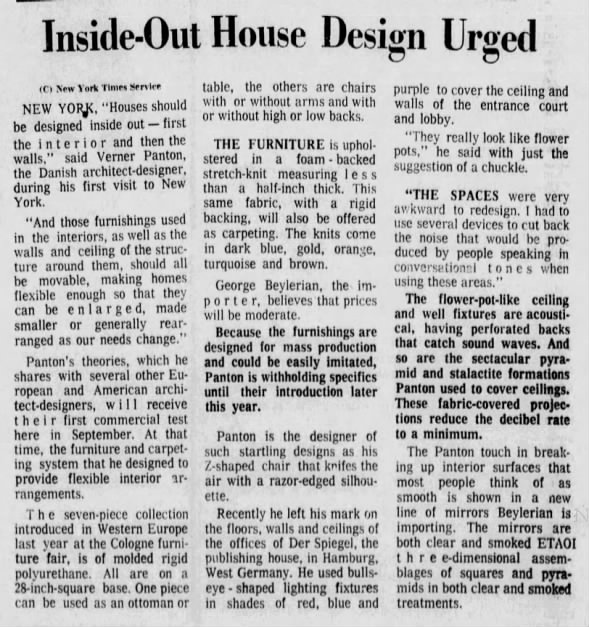 The Pritzker Architecture Prize recognises a living architect or architects whose built work exemplifies a blend of talent, vision, and dedication that has resulted in significant and coherent contributions to humanity and the built environment through the practice of architecture.

By Lars Dybdahl A definitive history of Danish design in the twentieth century told by 101 iconic objects. Denmark has a long and illustrious tradition in the world of design. Danish furniture, textiles, home appliances, and utensils from the 1960s and 1970s are now more common than ever and can be found in design galleries and flea markets.