Jean Schlumberger (1907–1987), one of the most accomplished artists of the twentieth century, produced objects of unrivalled beauty. He was a man of exquisite taste, a jeweller who created extraordinary jewelled statements with a feeling of depth and life. Schlumberger’s conceptions of flora and fauna were unrestricted, portraying and producing a unique blending of natural forms to create his signature creations. Everything from deep-water shells to exotic plants to fantasy birds inspires his creative and inventive designs. Endless hybrids emerge from animals, plants, and minerals; a starfish transforms into a star, a flower into a sun, and a bird’s plumage into an angel’s wing. Schlumberger’s exquisite masterpieces are enduring symbols that represent both the artist’s creativity and Tiffany’s superior craftsmanship’s technical virtuosity.

Born in 1907 into a wealthy family of textile producers in Alsace, France, Schlumberger showed a knack for drawing at a young age. Despite his frequent drawing, Schlumberger’s parents discouraged him from pursuing the arts by sending him to Berlin in the 1930s to pursue a career as a banker—but Schlumberger had other ideas.

Schlumberger travelled to Paris in his early twenties to nurture his creative inclinations and passion for the arts. He found a job working for Lucien Lelong, a French couturier. He then went on to work for a Parisian art publishing business. He was drawn to the originality and novelty that characterised 1930s Parisian culture, and he relished in the city’s colourful and eccentric zeitgeist. Schlumberger, an antique collector who lacked the financial resources to obtain materials, would meander through the Marche des Puces, a Paris flea market, hunting for Victoriana relics like serpents and cherubs, as well as coloured glass artefacts. Schlumberger discovered Meissen porcelain flowers covering an old chandelier and transformed them into exquisite clips for his sophisticated friend circle one day. The porcelain clips from Schlumberger were an instant hit.

“I try to make everything look as if it were growing, uneven, organic,””

Schlumberger’s expertise spread quickly as he created new jewellery designs based on his discoveries. He began focusing solely on jewellery after receiving enough orders for his designs to enable him to leave his regular work. Jean Schlumberger immediately established himself as a sought-after vendor of excellent jewels for the Parisian aristocracy after opening an atelier on rue de la Boetie. Elsa Schiaparelli, a fashion designer, was also captivated by Schlumberger’s artistic genius after seeing the Duchess of Kent wearing his earrings in 1937.

Schiaparelli hired Schlumberger, a budding fashion designer recognised for her stylised accessories, to design her button and costume jewellery collections. Schlumberger’s inventive buttons for Schiaparelli’s clothes were an instant success—not only in Paris but worldwide—and suggested reliefs of animals, shells, cherubs, fruit, and insects, a vivid repertoire that would later recur in his jewellery designs. Diana Vreeland, the famed Vogue editor, encountered him while designing fantastical buttons for Schiaparelli’s clothes and was fascinated by his artistic vision.

Schlumberger had gone out and become a success story in his own right by the end of the 1930s. He designed hat pins for Madame Suzy and strappy heeled sandals for Delman, and his work was praised on both sides of the Atlantic. Schlumberger went to New York after serving in the French Army during World War II. He ran across a childhood friend, Nicolas Bongard, who was designing handcrafted buttons in Manhattan. Schlumberger’s jewelled birds and sea creatures clips were immediately noticed on the most stylish women after the two started a modest salon together in 1947.

The famous relationship between Tiffany & Co. and Jean Schlumberger began in 1956 when Tiffany & Co. chairman Walter Hoving invited Schlumberger to join the firm as vice president. Schlumberger agreed, ushering in a new era in the field of jewellery design. Schlumberger worked out of his design studio and salon on the mezzanine floor of the old Tiffany & Co. Fifth Avenue flagship shop, surrounded by bright rare coloured gemstones and diamonds. Schlumberger designed the Bird on a Rock clip, his elaborate paillonné enamel bangles and vividly coloured rings, the Cooper bracelet, and the Sixteen Stone diamond ring.

When Schlumberger initially arrived at Tiffany & Co., he mounted the famed Tiffany Diamond on a high jewellery design as one of his first artistic moves. The young designer was entrusted with setting the 128.54-carat Fancy Yellow diamond, the world’s largest and finest yellow diamond at the time, a bold move that cemented Schlumberger’s artistic status at Tiffany. The designer first proposed three settings for the famed yellow diamond: a necklace with diamond ribbons as the centrepiece, a clip with diamond-set wings, and a bracelet with diamond daises. The archive sketches of these designs demonstrate his originality and talent. However, Tiffany chose Jean Schlumberger’s renowned Ribbon Rosette necklace as the final design for the Tiffany Diamond setting in 1961.

The diamond was set in Jean Schlumberger’s most beloved designs, the Bird on a Rock clip, at the Musée des Arts Décoratifs’ Jean Schlumberger show in Paris in 1995. The Tiffany Diamond is the most valuable gemstone in the world, honouring Charles Lewis Tiffany’s vision and the design legacy of Jean Schlumberger.

All of Schlumberger’s jewellery designs began as sketches, and he was entirely self-taught, with no formal creative experience. The artist used the gouache method with continuous, fluid lines on smooth, ultrafine tracing paper, pen, and India ink as his medium, giving birth to his inventive shapes and attractive patterns. Schlumberger’s sketches also have a distinct sculptural element to them. Schlumberger often travelled to Bali, India and Thailand to draw. The designer was inspired by the natural elements found throughout his home on the Caribbean island of Guadeloupe, where he created some of his most well-known works. Schlumberger’s exotic Oiseau de Paradis clip, a mythical bird, glistening with kaleidoscope colours of yellow beryl, amethysts, emeralds, and sapphires, is an example of his ability to find something in nature and imbue it with a creative spirit. The artist’s original sketches have been saved, which is lucky. Over 3,000 Schlumberger drawings were donated to the Musée des Arts Décoratifs in 1995, greatly expanding the Drawings Department’s collection of jewellery designs.

Jean Schlumberger’s distinctive style is paillonné enamel. The labour-intensive process of layering enamel on 18k yellow gold, where translucent coloured enamel is burnt numerous times on fine sheets of gold foil, lends to rich hues with extraordinary depth of colour, is a 19th-century art form. Schlumberger’s multicoloured enamel masterpieces—beautifully accented with gold and coloured gemstones—are among the best jewellery designs of all time and remain iconic today, thanks to this time-honoured technique.

Schlumberger’s creations are also noted for their inventive usage of 18k yellow gold. Schlumberger’s trademark gold pieces, often woven in a poetic, flowing manner, reinterpret ropes, tassels, and ribbons, express the dynamism seen in nature and reflect his family’s textiles tradition. Thus, Schlumberger’s expansive use of gold is rooted in both his familial lineage and his affection for the natural world, whether it’s droplets of gold punctuating enamel, a gold X shape suggesting stitching, or gold stems, leaves, and blossoms suggestive of a garden.

Schlumberger’s Dolphin clip, a fanciful display of 18k yellow gold, diamonds, sapphires, and emeralds, is one of his most recognisable designs. The clip was initially a gift to Elizabeth Taylor from Richard Burton on the 1964 premiere of his picture, The Night of the Iguana, and is now part of her prestigious personal jewellery collection. Taylor was seen wearing the amazing clip on several occasions.

Schlumberger’s great career has been recognised with various medals and prizes from the art and fashion sectors. In 1958, he became the first jewellery designer to win the prestigious Fashion Critics’ Coty Award. In 1977, the French government awarded him the title of Chevalier of the National Order of Merit. The designer’s 30th anniversary with Tiffany was commemorated in a 1986 exhibition. Schlumberger was recognised with a retrospective named “Un Diamant dans la Ville” in 1995 at the Musée des Arts Décoratifs in Paris, which houses his original creations. This was only the third time the museum has paid a posthumous tribute to a jewellery designer. Paul and Rachel “Bunny” Mellon donated the world’s most extensive collection of Schlumberger artefacts to the permanent collection of the Virginia Museum of Fine Arts in the United States.

He continued to mix precious and fantastical elements throughout his career, employing antique jewellery he found in an old jeweller’s shop on rue du Temple and purchasing motifs cut out of coral, shells, or cameos that he inserted in precious materials in the middle of clips. Jean Schlumberger returned to Paris later in life, the city that had reawakened his artistic soul. He passed away in 1987, at the age of 80, leaving behind a legacy of bejewelled flowers, sea life, and fantastic birds. 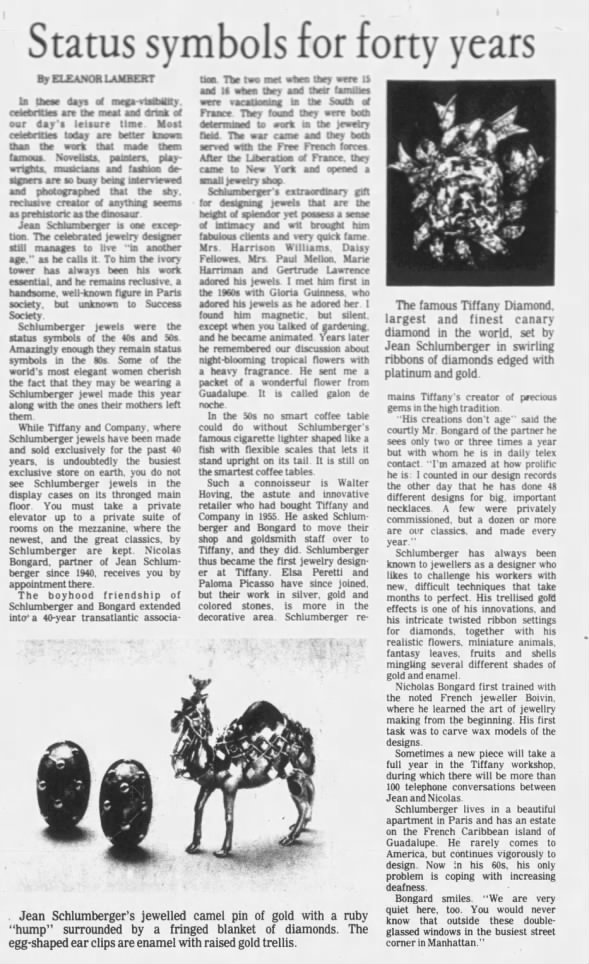 * This website may contain affiliate links, and I may earn a small commission when you click on links at no additional cost.  As an Amazon and Sovrn affiliate, I earn from qualifying purchases.