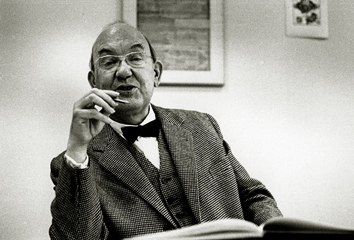 At Bailey Street Design we are interested in all elements of design, current and historical. It is important to pay tribute to those influential designers that pave the way. This week’s designer of the week is a typographic genius, Jan Tschichold.  I was first exposed to Tschichold at Shillington College where I learned Graphic Design.  His straight lines, and hierarchical appeal to me as a digital designer.  I think his ideas work well in the digital space.

German-born, Tschichold is one of the most outstanding and influential typographers of the 20th century, He cleared away the old typography of pre-1925 and made room for a modern, structured and regulated new typography. His work is characterised by rigorous structure, asymmetrical placement of contrasting elements, and layouts based on horizontal and vertical underlying grids. You will also see a harmonious composition of balance, white space, straight lines and thick rules used throughout his designs.

Tschichold was born in Leipzig, in 1902.  His first book, “Elementary Typography,” was published in 1925.  In 1927, he became a lecturer at the Master School for Printing, in Munich.  He held this position until 1933 when he was dismissed by the Nazis.  He relocated to Switzerland where he continued to design and teach.  In his third book, “Typographische Gestaltung,” he begins to turn away from “the new typography” as he becomes to associate its rigid style with the totalitarianism of the Nazis.

Tschichold is known for his famous typeface Sabon, he authored several books the most influential being The New Typography, published in 1928. He is, however, most remembered for his post-war refashioning of Penguin paperbacks.  During his career with Penguin, he re-designed over 500 books. Below you will see some examples of his work for Penguin.

What is deep etching?

What branding really consists of?

Web Typography is the design in ‘web design’

2020-10-03
Previous Post: Andrew Martilla the cat photographer
Next Post: These egg-inspired earbuds were designed to be discreet